Table of Contents
Jump to the recipe

In our freezer-friendly version, we skip the can and make a quick homemade cream of mushroom soup with fresh mushrooms. Not only do the fresh mushrooms and garlic make this casserole extra delicious, it also means you're skipping the extra sodium found in the condensed soup. Traditional tater tot casserole is made in a 9x13 baking dish but we are going to make it in individual portions in our 1- and 2-cup Souper Cubes so you can only heat up a portion at a time instead of an entire big dish. Ground Beef: we like to use lean ground beef but you could also use ground turkey or make this entirely vegetarian and use white beans.

Vegetables: the classic version only has onion and green beans but we're adding some additional veggies for some color and more nutrients. Along with onion, we're adding a diced red bell pepper with the ground beef. And since we're making homemade mushroom soup, you'll find a whole pound of mushrooms in the sauce. We used fresh green beans but feel free to use frozen or canned too in a pinch.

Cheese: shredded mild yellow cheddar cheese is typical for a tater tot casserole but we decided to kick it up a notch and use something a little stronger like a sharp white cheddar. If you like a bit of heat, try shredded pepper jack. If you like to keep it mild, shredded mozzarella will also work.

Milk and Broth: to get a creamy sauce with a rich flavor, we used a blend of broth and milk for the sauce. Since there's flour for adding thickness to the sauce, there's no need to use cream.

Tater Tots: you can't have a tater tot casserole without tater tots. Layering them on top of the casserole means the filling stays moist while the tater tots get crispy on top. YUM.

Making cream of mushroom sauce from scratch takes a little more time than opening a can but we promise it's worth it. Instead of getting umami from MSG and yeast extract, the homemade version uses butter, fresh cremini mushrooms, shallots, thyme, broth, and milk for a decadent sauce. If you are watching your sodium, making the sauce from scratch is also a benefit as you can adjust the salt level to your taste.

How To Make Tater Tot Casserole Yes, you can freeze cream sauce casseroles! To prevent it from being mushy when you reheat, you want to do 2 important things: You can bake the casserole from thawed or frozen. If baking from frozen, place the casserole in a baking dish, such as the Souper Cubes stoneware. Cover with foil and bake at 400°F until no longer frozen, approximately 30 minutes for the 1-cup portion and 50 minutes for a 2-cup portion. Uncover the casserole and continue baking until the filling is bubbling and the tater tots are crispy on the edges, 10 to 15 minutes more.

If baking from thawed, bake uncovered at 350°F until the filling is bubbling and the tater tots are crispy on the edges, about 30 minutes for a 1-cup portion and 45 minutes for a 2-cup portion.

This classic and comforting tater tot casserole gets a delicious makeover when we add extra veggies and make the mushroom sauce from scratch. But if you're in a hurry, free free to swap in a can of cream of mushroom soup and frozen green beans. 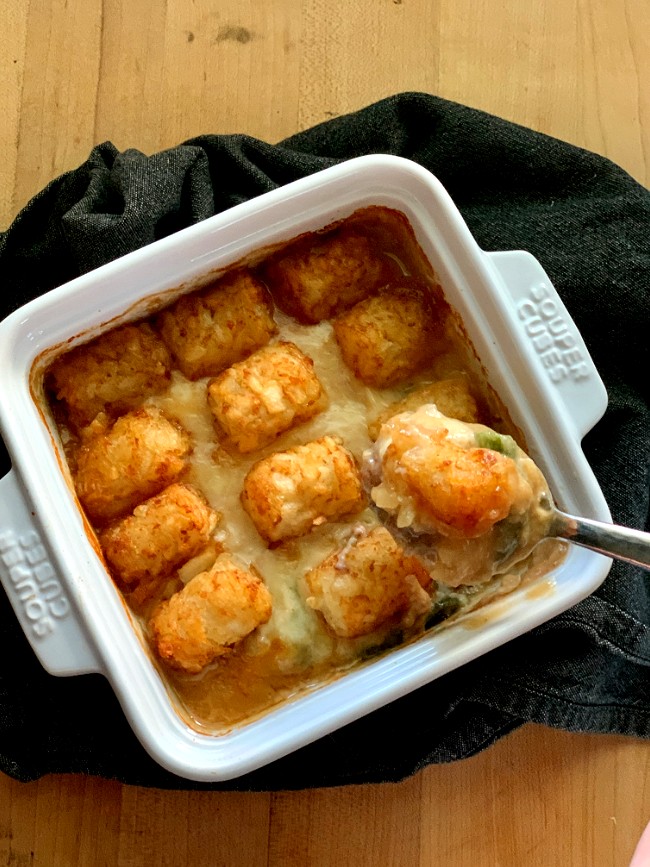 To Assemble the Casserole

To Bake from Frozen

If you're short on time, swap the mushroom sauce for a can of cream of mushroom soup and frozen cut green beans.